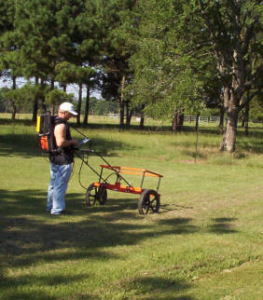 B.R. Jones and Associates Inc. was organized in 1981 to represent manufacturers of geophysical equipment in Texas, Oklahoma, Louisiana and Mississippi. The company owned equipment for demonstration to potential customers but occasionally rented it when it was not needed for other purposes. As the use of geophysical instruments increased in non oil and gas industries the demand for equipment rentals outgrew an “occasional” rental and our four state area. In 1997 it was decided for legal, accounting and other reasons to separate equipment rentals and sales. B.R. Jones & Associates, Inc. retained the sales of equipment and K.D Jones Instrument Corporation was organized to rent equipment. The two companies share facilities and some personnel.

On January 1, 2009 the two companies were officially merged. B.R, Jones was dissolved and K.D. Jones Instrument Corporation is the surviving company

The following excerpts are from a newsletter chronicling the past, present, and future of K.D. Jones Instruments.

Part one of this series examines Bill Jones’s educational and professional past that helped shape the philosophy of his future businesses.

Part One—   In 1951, mid-semester of his junior year, Bill Jones dropped out of college to join the US Air Force where he was assigned to electronics school at Scott Air Force Base IL, thirty miles outside of St Louis, MO. After graduation, he was sent to Kelly Field in San Antonio, TX where his squadron was responsible for preflight checkups and maintenance on aircraft electronics. In 1952, Bill was sent back to Scott Air Force Base for another 28 weeks to further learn in-depth repair of communication and navigation as well as IFF (Identification of Friend or Foe) radar systems. At the end of 28 weeks, Bill was kept on as an instructor where he taught until he was discharged.

After earning a BS and MS degree in geology from Texas Tech, Bill pursued a PHD in geology at Texas A&M; he never thought about electronics again until an instructor discovered his background and asked him if he wanted to be an electronic technician in the oceanography department. “Since the job paid about three times as much as my T.A. job, it took about 30 seconds to accept,” Bill recalls. During this time, LaCoste and Romberg had developed a marine gravity meter for submarines. The geophysical industry as well as academia was interested in adapting this meter for surface ships. The Office of Naval Research purchased one of them and made it available to several universities for testing and research. As it turned out, Texas A&M was the only university with a suitable ship. Two grad students were hired for the job, but the other operator quit before the program started so Bill was the only operator of LaCoste’s S-meter while it was at Texas A&M. In addition to a gravity meter, Bill was able to learn how to use and operate high resolution seismic systems as well as marine magnetometers (on loan from Vacquier at Scripps no less).

Bill Jones with a Geonics EM61,

Bill left Texas A&M in 1967 to work for geophysical companies where his primary responsibility was to supervise quality control during acquisition of about 100,000 miles of gravity, magnetic, and high resolution surveys off the west coast of Florida, the east coast of the United States, and the Mediterranean and Atlantic coasts of North Africa. He also worked for Harvey-Lynch, Inc. as a manufacturers’ representative for companies that built side-scan sonar, seismic profiling systems, magnetometers, navigation systems as well as other marine instruments. One of his main job duties included coordinating workshops for various groups to train. The Bureau of Land Management’s decision to apply and enforce the 1906 Antiquities Act to the continental shelf to a depth of 600 feet prompted the urgency to do geophysical surveys in shallow water. Sites had to be surveyed before offshore drilling could occur. Since virtually no one in the geophysical industry had ever heard of these instruments, much less operated one, there developed a great need for workshops to train three different groups: field technicians (operators), survey planners and data interpreters, and the government regulators who wrote the rules.

From his time developing and teaching these workshops, Bill developed the fundamentals of his future companies. These fundamentals included: 1) Supplying the customer with equipment that is in good working condition that operates within the specifications of the manufacture. 2) Informing potential operators of the instrument’s capabilities and limitations. 3) Providing technical support 24/7 as downtime is very costly. 4) Making customers knowledgeable about the instruments by offering training. 5) Setting clear terms and conditions but still remembering that if the customer is not making a profit then they likely will not be a customer for long.

Part two of this series examines the formation of K.D. Jones Instrument Corporation.

Part Two—From 1975-1980, Bill worked as a consultant for Harvey-Lynch, Inc in Houston, TX. They represented manufacturers of marine geophysical and navigation equipment including Geometrics. He left them in 1980 to work as a representative of Oceanographic Services. In 1981, because Bill knew most of the founders of Geometrics, their sales manager asked him if he would like to become a manufacture’s representative and sell their seismic products. He excitedly agreed since the oil industry was booming. According to Bill, “I said yes because I had already decided I wanted to be a manufacturer’s representative. I loved working for Harvey-Lynch; every day was a new challenge, and I discovered that I liked working with people more than I did science.” Therefore, Bill started another company B.R. Jones & Associates and signed-on with Geometrics. Bill adds, “Although I was doing okay, I realized that I needed other products to sell for long term survival.” Later, Bill made agreements with Geonics, Sensors & Software, AGI, and a couple of other companies to represent their products in his territory: Texas, Louisiana, Mississippi, and Oklahoma.

Bill made connections with many of these companies at trade shows looking to see if he could represent them in his territory. At first, the manufacturers loaned him the equipment, but it didn’t take long for the manufacturers to decide that they didn’t want to loan Bill equipment to demonstrate with and so he bought his own instruments. Occasionally, customers wanted to rent the equipment; Bill knew that rentals often lead to sales. Therefore, if he didn’t have a demonstration scheduled, he rented it out, but he says, “My primary goal was always to sell equipment.” Bill realized that the best method to sell equipment was to get the instruments in the hands of potential customers. During this time, he did a lot of travelling, driving between 50 and 70 thousand miles a year.

Katie, Bill’s wife, was the face of the company during that time. She answered the phone, paid the bills, did the invoicing, and basically ran the company. She instinctively knew how to react to customers and take care of problems. Katie was a history major and knew nothing about science or geophysics but she knew and understood people! Katie was an important and integral part of the company. This was before the advent of cell phones so she couldn’t even call Bill to get answers to questions. Bill called the office periodically during the day to check with her. Bill states, “At one time, I probably knew the location of every payphone booth in 4 states.”

Environmental surveys boomed in the early 1990s and it began to change the focus of his business. Calls to rent equipment became much more frequent than sales. Bill recalls, “We then started buying equipment to rent, not demonstration.” It also created a problem in that, after renting, if a customer did want to buy equipment outside of his territory, he would not get a commission. Therefore, in 1997, he created a second company K.D. Jones Instrument Corporation to handle the rentals and transferred most of the equipment to that company. Being a woman-owned company helped in the bidding process for instrument rentals. The two companies consolidated in 2008.

In 2013, Art Fromm became the President and CEO of the company. Art and Bill met in 1989 at a Geometrics workshop in Sunnyvale, CA. During the workshop, the Loma Preita earthquake (magnitude 6.9) occurred. Bill exclaims, “We got firsthand experience with seismic waves!” After the workshop, Art visited Bill for a couple of weeks because Bill owned the seismograph made by Geometrics, and they “had lots of fun learning how to use the seismograph.” Since then, Art frequently visited and talked to Bill and Katie over the phone.  From these experiences, Bill came to three conclusions about Art Fromm: “One, he was a heck of a good geophysicist with both academic and field experience. Two, he had been an independent business man for 25+ years. And three, he was a man of integrity. It’s hard to find someone with all those assets.” Since Katie’s illness and death in 2013, Bill has stepped back from day to day operations but still keeps an attentive eye on the orders and bank accounts. He also will “Offer my opinion if asked and sometimes if I’m not asked— mostly long term things that may affect the profitability of the company.”

In Bill’s time working with geophysics, he says, “The industry hasn’t changed much. Maybe there are fewer environmental projects and more engineering projects.” He states that in recent years, “K.D. Jones Instruments has gotten better in that it has better personnel and a more diversified product line.” Bill would like to see the company grow in the future by improving the services we provide, diversifying our rental pool, and expanding our customer base.